The Borealum Emerges: My New PC and Other Updates

Hey everyone… anyone… possibly just me and the tumbleweed.

It’s that magical time again where I apologise to the ether for not updating this blog in seemingly forever. Sorry about that!

In my defence, I’ve had some new things to keep me occupied and the most recent of which is the purchase of a new computer, or more precisely, many expensive computer parts that were put together in record speed by a work colleague of my mum to become my new and very shiny computer. It even has cool lights.

As well as putting my machine together, he took some photos, which he was kind enough to let me use in this post and so, without further ado, I present to you, the Borealum: my new PC dedicated to all things gamey and video-making-y.

Not only that, but I’ve been hard at work alongside a couple of friends to produce a podcast, so stay tuned for more news on that front. We’ll be talking about games, films and general geekdom as well as other subjects that interest us. But yeah, more on that soon enough! 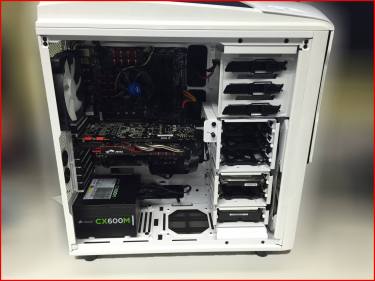 I’ve also been posting fairly regularly on my friend’s blog, Critical Mass. Every now and then I’ll link the articles I post there here and on my twitter. Mostly I’m writing games and movie reviews, the most recent of which was a review of Batman: Arkham Knight (PC) and just before that a review of Marvel’s Ant-Man. Yep, I’m not afraid to blatantly self-advertise.

Speaking of which, I didn’t want to end this post without mentioning

I didn’t want to end this post without giving one final shout out to the guy who built my PC for me. He’s really done a cracking job and I’d highly recommend anyone interested in such things go and check out his Facebook page: https://www.facebook.com/CustomPCEssex

About A. R. Whitehead

I'm an aspiring author, with a degree in English and Creative Writing. I love books, comics, games and film. My favourite genres are Science Fiction and Fantasy.
View all posts by A. R. Whitehead →
This entry was posted in General and tagged Borealum, Computer, Critical Mass, NZXT Phantom 530, PC, Podcast, Reviews, YouTube. Bookmark the permalink.